Hobie created the Standup Paddleboard, Sup, which is a surfboard redesigned to stand up and paddle. Hobie is all about developing new ways to have fun and enjoy the time on the water. Limited only by his imagination, Hobie created a line of paddleboards for racing that uses the CAD technology to shape the board. It is then hand finished to provide top quality and give the ultimate performance possible. The recreation paddleboards combine features so they can be used to race, tour and travel long distances. These Sups can take you almost anywhere and in different conditions. Touring paddleboards also combine the racing features so that they are fast in any condition. They have the stability that inspires confidence and helps to maintain the forward motion between changing paddle strokes. The surf line of Sups is great for flat waters of the harbor as well as riding the waves. Hobie invites you to "Have a Hobie Day." 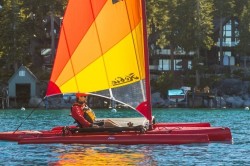 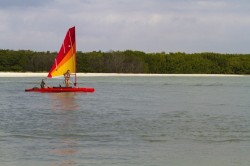