In 1970, David Stanton was working for General Recreation Corporation and was transferred to Charleston, SC to take the helm of their sailboat division, American Fiberglass Corporation, which was a builder of entry level sailboats and fishing boats. During his tenure as president of American Fiberglass, David fell in love with the boating world, especially sailing. He enjoyed it so much that in 1976 he purchased the Aqua Cat Ca tamaran product line and left General Recreation to start his own business, American Sail, Inc. In subsequent years, the original Aqua Cat 12 was updated to a faster 12.5 version and a larger model, the Aqua Cat 14, was developed. This fun and simple catamaran has brought years of sailing joy to many sailors of all ages. With over 30,000 built, it is one of the most successful sailboats ever designed and was inducted into the National Sailboat Hall of Fame in 2001.

Over the years Dave has been a pivotal member of the sailboat industry, chairing the National Sailing Industry Association for three terms and serving as a board member of Sail America. In 2002 Dave was awarded the industry leadership award by Sail magazine. He continues today as an icon in the industry with his sailboat company having produced over 30,000 small sailboats.

The company mission at American Sail has always been to provide family sailboats that are easy to rig and easy to sail, yet fast and fun. In the 1980's, an emphasis was put on designing a line of yacht tenders and entry level daysailers. During this time the Dink line of tenders, the Aqua Finn, and the American 14.6 daysailers were designed. The Dinks offered light-weight, quality fiberglass construction to the tender market which has been saturated with inflatables. These little boats were offered in three styles: a basic rowing version, a trihull version, and a sailing version. The Aqua Finn and the American 14.6 daysailers were both immediate success stories since both provided all the features novice sailors required and also offered the performance characteristics requested by experienced sailors. The Aqua Finn has always been a perfect boat for those who don't mind getting a little wet. This board boat can be rigged in ten minutes and has a rugged design built to take the abuse in environments such as camps, rentals, and sailing schools. The American 14.6 remains today the most popular boat in the line with its quick-planing hull design, large comfortable cockpit, and above head boom. The boat is very difficult to capsize and easy to rig which makes it a favorite among sailing schools and camps.

In the 1990's an effort was made to develop a daysailer in the ten foot range that was sloop rigged with main and jibsail, something unheard of for a boat that small. In addition we wanted a boat that was a dry sailing boat you sit in, not on. The Pennant was released in 1993 to fill that need. This unique little boat is perfect for a parent teaching a child the basics of sailing. It also became perfect for use as a tender for larger vessels when a motor mount block and oarlock sockets were added to the package. Another boat was added to the line in the 1990's. Over the years many sailors who loved the design of the American 14.6 Daysailer requested a larger version for 4-6 adults. In 1997, the American 18 Daysailer was released to fill that request. This boat has quickly developed a following and there really is no boat on the market to match its stability and cockpit space.

American Sail has always been a family business. Every family member has been involved at some point. Each has developed a love for sailing and plans are in place for American Sail to continue its mission of building family sailboats into the next generation. We hope you will clearly see the pride we take in our workmanship and enjoy sailing with us for a lifetime. 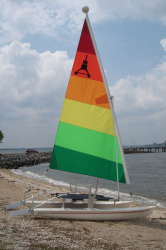 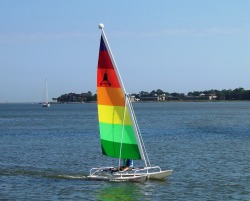