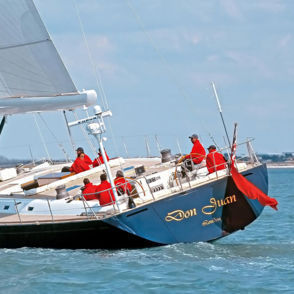 Description
Destined for an Argentinian owner, Don Juan is again signed Germán Frers. Her sailing programme in the coastal waters off Buenos Aires dictated considerable design constraints: the draft does not exceed 1.90 m for a length of 95 feet, which is uncommon. To control the hull with its generous lines, the rudder is therefore telescopic. Don Juan also had to be capable of being handled by a couple, without a professional crew on board, a challenge for a vessel displacing some 65 tonnes. The very sleek deck lines therefore incorporate automated fittings with extensive use of hydraulics, and a furling boom on a carbon mast. Don Juan is rigged as a sloop but her self-tacking Solent jib greatly facilitates handling. Her lines, characterized by a low freeboard and reduced sheers makes this aluminium-built yacht highly alluring.

The interior layout affords exceptional volumes.The 29-metre hull has only three cabins, which leaves plenty of room to move about.

Don Juan is also the first yacht to bear Hervé Couëdel’s signature as interior designer. Trained in the design office established when CNB was launched, Hervé worked on interiors for a long time alongside Olivier Lafourcade, before setting himself up as a freelance designer.