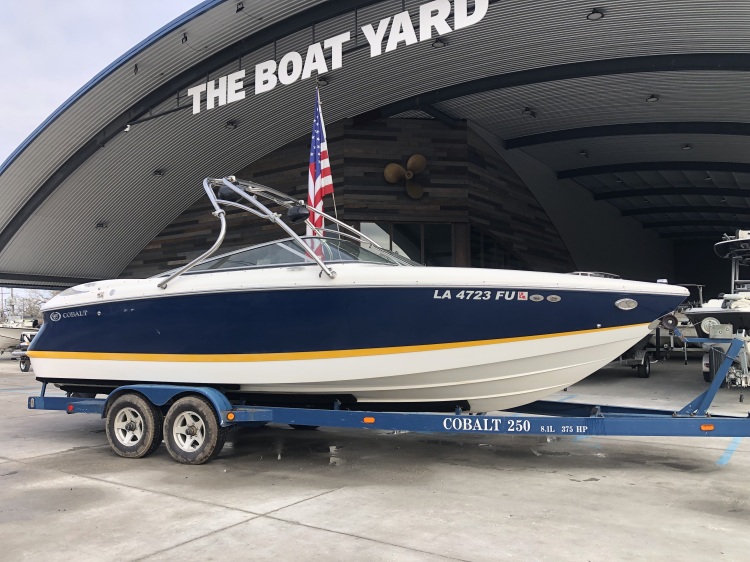 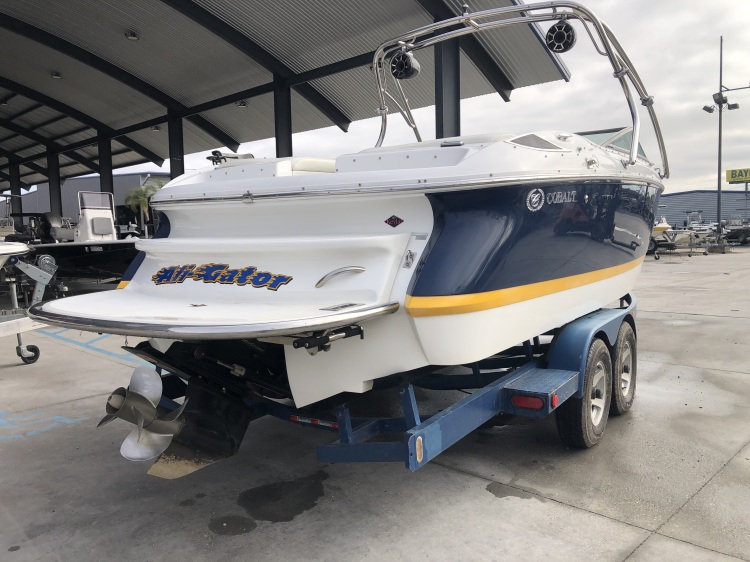 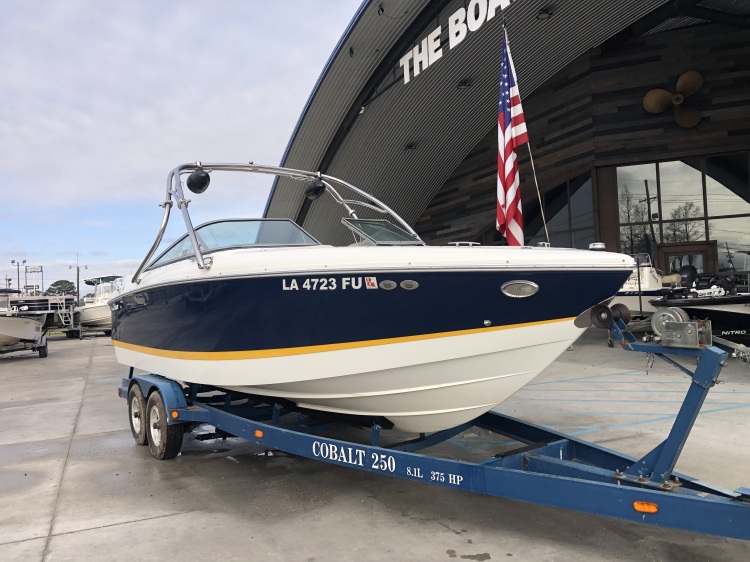 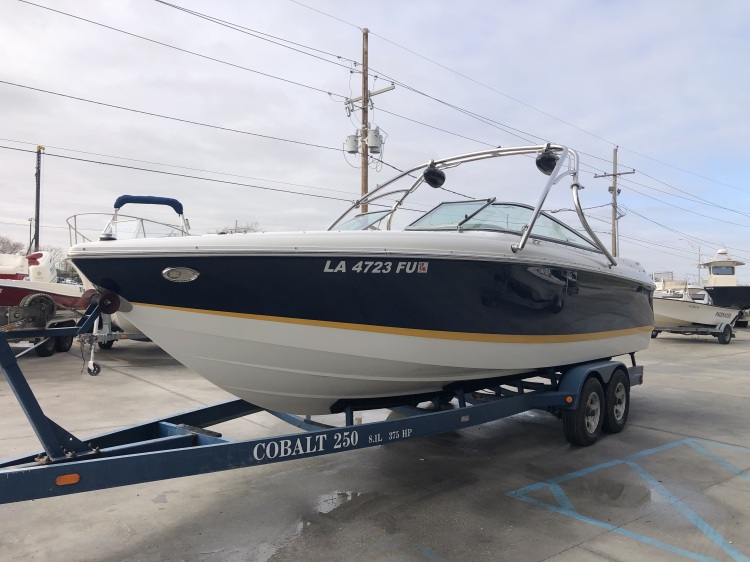 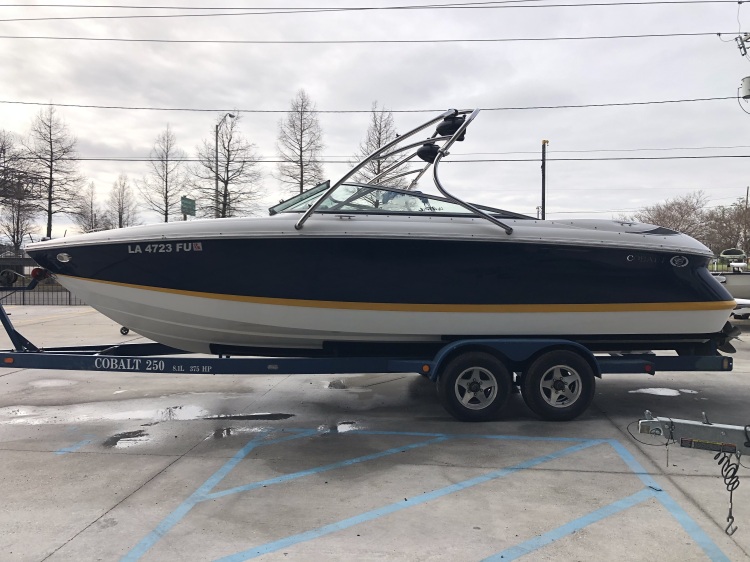 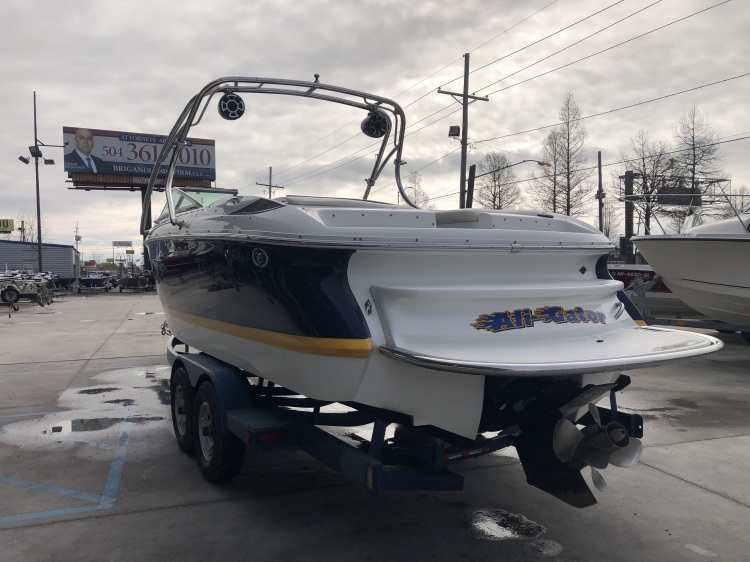 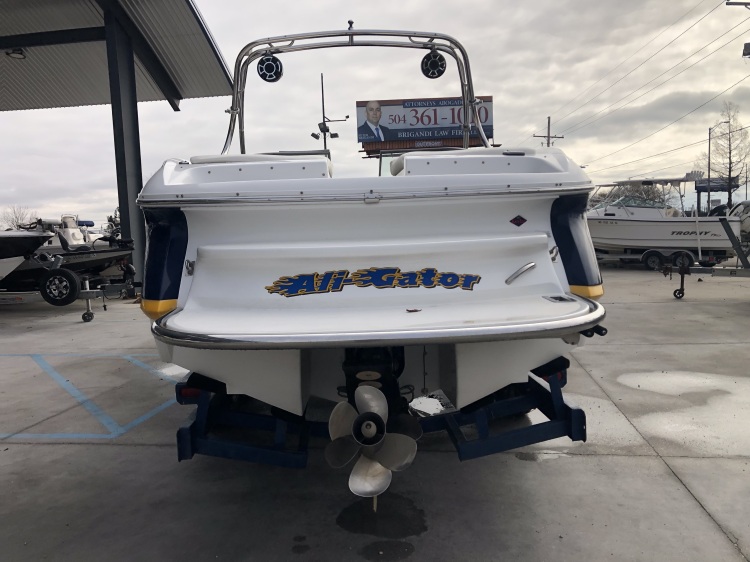 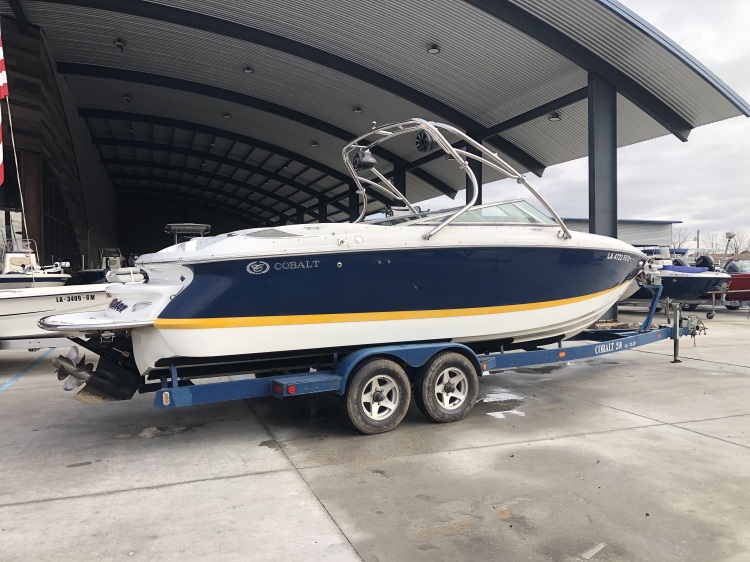 
Description
"Call or text Capt. Logan 337-380-1566 ---Boatyardlogan@gmail.comFinancing available-Trades Accepted2006 Cobalt 250Mercruiser 496/8.1L with 687hrsTandem axle trailerSavvy runabout builders paid attention when wakeboarding revived the sagging tournament tow-boat market a few years back. That's why you're seeing more traditional stern-drive models with towers. More than smart marketing and fashion, the trend makes real-world sense because most recreational boarding happens behind stern-drive runabouts. Why not improve the experience for the recreational rider?Embracing the trend, Cobalt equipped its 250 BR with a tower, as well as a jumbo, two-tier add-on fiberglass swim platform and a PerfectPass speed-control, and sent it to our Performance Trials in Parker, Ariz. The 25-footer proved to be a capable tow boat with polished handling manners and abundant features.PerformanceWith a 320-hp MerCruiser MX 6.2 MPI motor and a twin-prop Bravo Three drive with 26'-pitch wheels providing the pop, the 250 BR reached 50.1 mph at 5,200 rpm. It came on plane in 4.8 seconds with its Bennett trim tabs down, reached 45 mph in 15 seconds and ran from 20 to 40 mph in 6.2 seconds.Although those numbers were acceptable for a small-block-powered, family-oriented bow rider weighing nearly 5,000 pounds, we'd opt for an engine upgrade. Both the 420-hp Volvo Penta GXi DP and 425-hp MerCruiser 496 Mag HO motors are offered for the boat, and either would give it more snap.More power would help the 250 BR maintain its speed through 40-mph slalom turns, something it could not do with the supplied propulsion package. That said, the 250 BR was crisp in slalom turns at 20 and 30 mph, as well as circle turns at cruising speeds. It also tracked gracefully, without veering during sudden acceleration and deceleration.WorkmanshipThe 250 BR's blue and white gelcoat, with yellow in-gel accents, displayed decent shine and its mold work was mostly smooth. Cobalt hand-laid the boat with various layers of 1 1/2- and 24-ounce mat, 24-ounce woven roving and P9252 resin. For added strength, the 25-footer's chines were reinforced with knitted Kevlar.To protect the 250 BR's hullsides, the builder installed a vinyl rubrail with a stainless-steel insert. Though the rubrail was up to the job, it was not aligned at meeting points and--in terms of attention to detail--not up to Cobalt's rigorous standards. The abundance of high-quality stainless-steel hardware, on the other hand, from the cleats to the wakeboard tower, was what we've come to expect.Two sturdy gas struts and a stainless-steel lifting handle made it easy to raise the manual engine hatch. The engine compartment offered copious space for the small-block motor, which was lag-bolted to the stringers. Rigging was tidy and included conduit protection for the wiring, adequate support for the wire looms and a smooth gray gelcoat finish for the bilge.InteriorEverything a family could conceivably want--and then some--for a long day on the water was built into the 250 BR. Take the boat's huge add-on split-level fiberglass swim platform. It didn't just have an innovative T-style telescoping ladder and a rail around the lower step, it had an integrated draining locker in its upper section. The locker was within reach of the lower section of the platform.From the top step of the platform, it was easy to reach the cockpit thanks to a center walkway in the sun pad and aft bench. With snap-in cushions in place in both positions, the walkway disappeared. Additional seating included two molded rear-facing jumpers, flip-up-bottom buckets for the driver and co-pilot, and contoured lounges--and few builders do them as well as Cobalt--in the open bow.You cannot have too much stowage space in a family runabout, especially one targeted at the watersports crowd. Cobalt's designers know this and missed no opportunity to create stowage space. We found it on both sides of the motor (easily enough space for wakeboards), under each jumper (equipped with drains, these spaces were primarily designed to be used as coolers, but could handle gear), under the rear bench, in the driver's console and under every cushion in the open bow. To top it off, the locker in the snap-in-carpeted sole was one of the largest we've seen and was covered by a hinged gull-wing-style lid that opened on a gas strut.To port, the co-pilot's spot included an immense locking glove box. Hinged at the walk-through, half the console swung open to reveal a head locker that, without the head unit, also could be used to hold water toys.Elegant and ergonomic, the 250 BR's helm station included a leather-wrapped woodgrain steering wheel that tilted, and privately labeled gauges in molded extensions on the dash. Rather than outfitting the helm with a dedicated tachometer, the builder used the PerfectPass system gauge, which provided a digital readout of engine rpm.Towed SportsHard-core wakeboarders probably wouldn't abandon their purpose-built, tow boats for the 250 BR, but casual riders likely will love it. Our expert rider said that although the boat's wake wasn't crisp, it was large enough for intermediates and great for carving.As expected, our wakeboard and ski test team members praised the giant swim platform for its space and integrated locker.OverallBefore the wakeboard craze, few runabouts offered special accommodations for boarders and skiers. Those days are gone. Cobalt's 250 BR is a great example of the 'new breed' of runabouts that can handle towing, as well as recreational, duty."